HENDERSONVILLE, Tenn. – Single-family homes in Sumner County sold for an average of nearly $450,000 in September, a 21% increase since January, and are fetching an average of $174 per square foot.

New data released by Sumner REALTORS®, the nonprofit trade association representing more than 900 local REALTORS® and affiliated professionals, shows that single-family residential properties are lasting just one week on the market, on average. The association reports a severe lack of available properties for would-be buyers and a climate even less forgiving than what the numbers suggest.

“A slight ‘cooling off’ reported by some national analysts does not reflect what is happening in the local real estate market. The indicators we monitor, such as total inventory and new listings, actually trended in the wrong direction in the past month for single-family properties. Our advice to consumers is the same as we are giving our REALTOR® members: Buckle in for a fall season with sustained brisk competition,” said Shellie Young Tucker, ABR, CRS, C2EX, GRI, 2021 President of Sumner REALTORS®.

New property listings dropped slightly from August, further squeezing an already deficient supply. Demand, meanwhile, remains high, fueled by historically low interest rates that have increased some of late but not enough to dampen local activity. Sellers have clear leverage in contract negotiations and are typically choosing from multiple offers.

Buyers, meanwhile, can expect continued difficulty finding a home. Sumner REALTORS® members report notable activity among consumers relocating to Middle Tennessee from other parts of the country, and a marked increase in the number of buyers willing to shell out cash to win deals. The most desirable properties are attracting multiple offers within the first 24 to 48 hours and typically sell for much higher than the list price, with additional concessions from the buyer in the contract.

“This is the environment REALTORS® have weathered for many months now and it does not appear to be changing any time soon. Sellers are still in an enviable position. Buyers just need to understand what they are getting into before they begin searching for properties. A good REALTOR® will deliver immediate value to the process by explaining the market and setting the right expectations,” added Tucker. 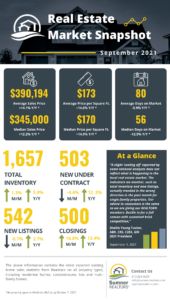